On November 10th, as a part of the 2017 edition of Mobile UX London, our third annual main event, our community had the pleasure of welcoming Shelbian Fung, Interaction Designer at Google’s HQ in San Francisco. As a special guest, Fung offered unique insights into the way Google approaches “Designing AI Experience for Chat Mediums” in his namesake talk. His focus was mainly on the particular case study of the messenger, Google Allo, and how chatbots should be seamlessly integrated into the habits that already define the chat medium. The textual interaction with AI that Fung describes is a far different approach from what we’ve seen executed so far in this space and, quite possibly, represents the more intuitive way to optimize the concept of AI/Chatbots. If you managed to catch up with Shelbian Fung at the 2017 MUXL Conference, this blog post will be a great refresher on some of the key hot topics that came up. If not, this blog post will help you catch up with what you missed at the live event!

In order to contextualize the opportunity that companies in the chatbot space are currently vying for, Fung began by stating the initially obvious position that, “messaging is big”. Although most of us consider that we are aware of this trend, the evidence of messaging’s extreme dominance over the time we spend on our mobile devices was truly striking when we got down to the real data. “In the US, people spend over 5 hours a day on their mobile phones,” states Fung. But how are those hours actually spent? In truth, messaging is taking over all other activities we take part in over mobile at an alarming rate.

Fung suggests an already active consequence of the prevalence of messaging by quoting The Verge online magazine author, Al Plumier, when he says that, “soon there will be a bot for everything…for burgers and flowers and all other nouns” Unfortunately, despite the obvious opportunities associated with this innovation, chatbots, as they exist today, have resulted in a lot of let-downs for their enthusiastic user base. After the concept of “chatbots” moved beyond the status of buzzword and became something people began to try using in their daily lives, the feedback was largely…unimpressed. Nick Statt, another author covering chat bots for The Verge, cited message bots as “the slowest way to use the internet”. Chatbots were definitely not taking off in their current incarnation…but why?

Issues that plagued chatbots and prevented them from being used in a widespread way included:

So, with their recent product called Allo, Google decided to go back to the roots of messaging and re-imagine the current chatbot model by adding the service contextually in conversations. Instead of treating the chatbot as a separate service, Google’s goal was to use AI in order to elevate the conversations the user was already having and streamline the process that was already taking place there.

For example, Google Allo aims to stay true to keeping human connections by treating the chatbot as an add-on service on top of existing chats via the Google Assistant button and ML suggested replies. In this way, the chatbot is not separate from the conversation, but contextual to the conversation instead. One of Fung’s own chats using Allo, revealed the enhancement of a conversations he was having that made use of the Google Assistant button as well as an ML suggestion to organize a meal between friends. 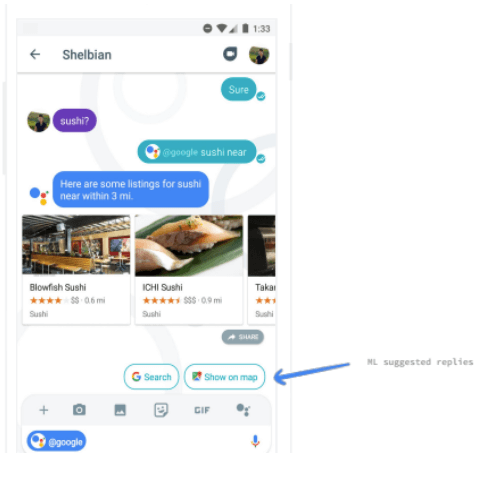 This entry was posted in In Blog and tagged Chatbots. Bookmark the permalink.